It started with a pair of shoes

Legal Aid Alberta’s Jenny Le shares the story of her journey to Canada and, ultimately, the Client Services team

Jenny Le took a leap of faith when she moved to Canada.

Living in the large, bustling city of Ho Chi Minh, Le was content with her day-to-day life in Vietnam—raising her two daughters and working as director of sales in the hospitality industry.

So, when her husband brought up the idea of moving abroad, she wasn’t exactly thrilled.

“I had a good career and income,” said Le. “I was extremely hesitant to sacrifice our comfortability.”

Now, living as a permanent resident in Edmonton and working as administrative support for the Client Services team at Legal Aid Alberta (LAA), she’s glad that she did.

Le is one of several women across Edmonton that shared her newcomer story through The Shoe Project, a non-profit organization dedicated to uplifting the voices of immigrant women through workshops, stories and performances. Each story uses a pair of shoes as a metaphor to describe each woman’s unique trek to Canada.

Le reached her destination in a pair of heels.

“As a working mother, I began my journey with a pair of high heel shoes,” said Le. “When I arrived in Canada, I slipped into a pair of runners that symbolized the challenges and ongoing work I was facing in the immigration process.”

The running shoes also serve as a symbol of her decision to run away from the cultural and societal pressures in Vietnam. In some Asian cultures, Le explained, the patriarchal belief to favour sons over daughters has led to serious implications for families throughout history. For Le, as a mother to two daughters, it was the pressure to conform to this belief that solidified her decision to come to Canada.

“In a sense, I needed to run away from these cultural challenges.”

Bumps in the road

Once Le got to Canada, it wasn’t all smooth sailing.

Due to the COVID-19 pandemic, she had to face many challenges: she had been laid off from her previous job, her husband was unable to work due to visa restrictions, and she was notified that her application for residency had been denied.

“I was solely responsible for submitting the permanent residency application,” added Le. “I felt blame for putting my family in a position where we would have to return to Vietnam.”

Le was facing potential deportation and financial burden amid an ongoing pandemic. Those running shoes, as she describes, depicted the exhaustive efforts to rebuild the visa application for her family, while facing severe depression and anxiety in the process.

Giving back to the community through empathy

Thankfully, Le was granted permanent residency in 2021 and joined LAA as administrative support with the Client Services team shortly after.

“When I researched LAA and applied for the job, I found that I fit into the organization based on its values and mission. This was an opportunity for me to give back to the community and I’m happy to be part of LAA,” said Le.

Now, Le shares her empathy with the clients she works with and believes that small efforts can lead to meaningful change.

“Our clients are in tough times and have been in difficult situations, just like I experienced. If I put in extra effort, it’s the best way to give back to this country for what I’ve received while living here.”

At Legal Aid Alberta, we strive to protect the legal rights of our clients, advocate for families and transform our communities. It is not without the dedication and commitment of our Legal Aid Alberta team members that we can further advance our mission to deliver access to justice for all. 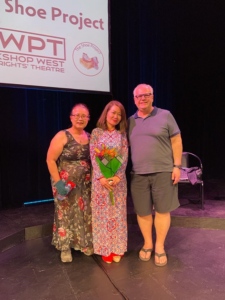 Jenny Le (centre) stands on the stage where she spoke about her newcomer story for The Shoe Project. She was joined by fellow LAA team member Akino Kameyama and Manager, Client Services Kelly Lewis.

Jenny Le and other speakers at The Shoe Project speaker event.