The most special day, bar none

LAA’s newest duty counsel lawyer: “I knew I wanted to be a lawyer...to make a difference.”

Desiree Syroid knew in her undergrad that working in law was how she would make a difference in people’s lives. On August 16, 2021, her hard work paid off when she was called to the bar in the Provincial Court of Alberta.

“I knew I wanted to be a lawyer early in my undergrad. I knew that I wanted to work directly with people, and I wanted to pursue a career where I could assist individuals and try to make a difference in their lives,” says Syroid.

“I have accomplished my long-term goals of becoming a lawyer, and I can now begin my career in a field that I am passionate about.”

Syroid was accompanied by her supportive family and partner, that which both showed pride in her accomplishments. A handful of Legal Aid Alberta lawyers that Provincial Court Judge Julie Llyod described as some of “the best lawyers in the province” were in attendance. Her principal, LAA lawyer Jessica Chapman, stood with her and delivered a speech submitting Syroids application to Judge Llyod.

Before the application began Chapman reminded Syroid that these were her last few moments before officially becoming a lawyer. A reminder of this day’s significance for her career and future.

Chapman made an inspiring and moving application speech to the Judge, where Syroid is noted as an exceptional and worthy candidate, by not only her principal but many other legal professionals. 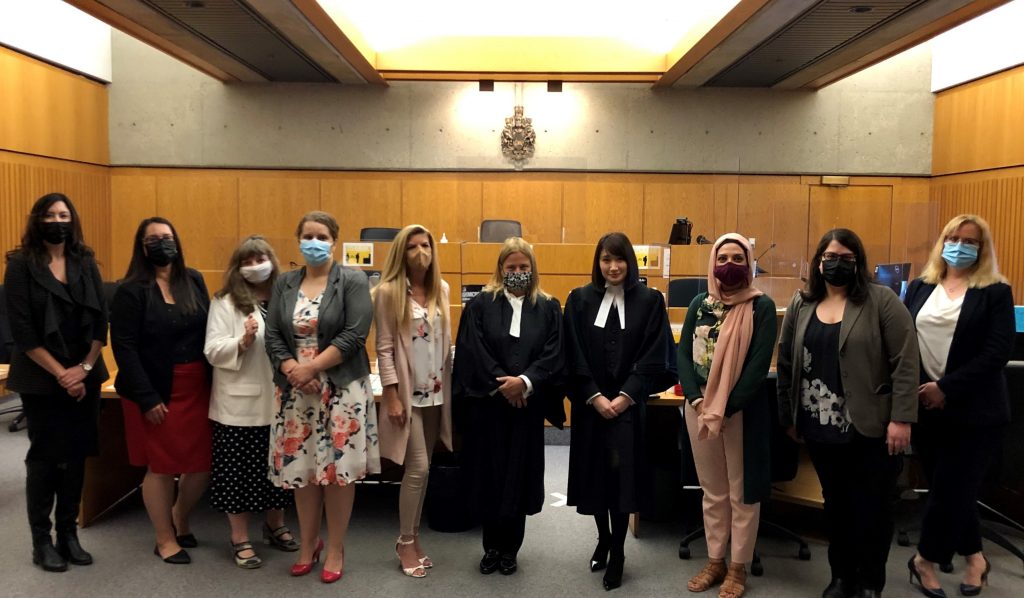 Desiree Syroid was supported by a formidable team of LAA lawyers as she was called to the bar Aug. 16.

“I feel privileged that I was named as her principal. She has had the opportunity to work with amazing lawyers in all the different areas of Legal Aid, as well as the executive and senior advisory counsel.”

Legal Aid Alberta lawyer, Amna Quereshi described Syroid as having the “innate skill to think on her feet” and says she would be a “formidable addition to our team.”

To follow Amna’s remarks, one week after being called to the bar, Desiree Syroid will be joining the criminal adult duty counsel team at Legal Aid Alberta. Duty Counsel are lawyers who provide free, on-the-spot legal advice in family, criminal and immigration cases for people living in Canada.

“Legal Aid provides the unique opportunity to work as Duty Counsel and puts me in contact with those most in need of access to justice,” Desiree says. “My colleagues at Legal Aid are inspiring as they are all strong advocates who truly make a difference in the lives of many, and I am grateful to be able to work alongside them as I wish to do the same in my career.”

December 02, 2022
Remembering those who fought for the freedoms we enjoy